Largely forgotten until this century, Annerley has been reborn as an eclectic inner-city haven.

Once a humble suburban strip on the edge of the city, Annerley now boasts a new generation of fans of its narrow, shady streets and character-filled homes.

Formerly characterised by ramshackle houses on rambling streets, Annerley has come alive with an influx of families seeking out colonial, Queenslander and post-war homes, and professionals looking to live comfortably, close to the city. Greek and Italian post-war migration has meant that Annerley has always been a diverse community – and this multicultural tradition has been kept alive with the arrival of families from Asia and Africa. Educational facilities in Annerley include; Junction Park State School, Mary Immaculate Catholic Primary School and Our Lady’s College. 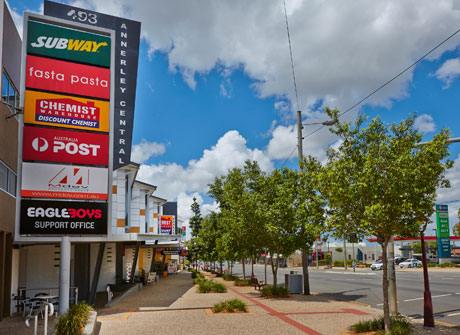 Close to the city (but not the chaos), Annerley is relatively compact and filled with character. Op-shops still have a home here, but they’re now filled with vintage-hunters, not bargain hunters. Restaurants and coffee shops have replaced greasy spoons and takeaways (although you can still find a fast greasy meal if you are in need) as well as the Junction Hotel for their famous steaks .Regular farmers markets are held in the nearby Boggo Road precinct, but many backyards have enough room for a small vegie patch of your own. Near Chardon’s Corner, you’ll find spice stores and other specialty shops catering to the recently arrived communities and curious locals, as well as Chardon’s Hotel for which the intersection is named. In the 1990s, Annerley was characterised by student sharehousing and low cost living in run-down wooden cottages and aging apartments. Today, scruffy student have been replaced by young professionals drinking coffee in smart cafes such as Bennies Cafe and Dudley Street Espresso &  Collectables. And those sharehouses and apartments? They’re now stylish family homes and cool inner-city pads.A few remnants of Annerley’s humble history remain – op-shops, pawn-shops and boarding houses – but they are gradually disappearing as urban renewal rolls down Ipswich Road. Comfortable yet eclectic, living here is relaxed and just the right amount of interesting. Those who want an appealing inner-city home with all the comforts of a much more distant suburb would be happy to make their home in Annerley.